Before I went on my no-buy, I ordered three lipsticks from Morgana Cryptoria because they were on sale, and I couldn't resist. Or chose not to. Or whatever. I was feeling celebratory over my new job starting. This is my fourth order from them, and it won't be my last. The new ones in this order are starred in the bottom pic. 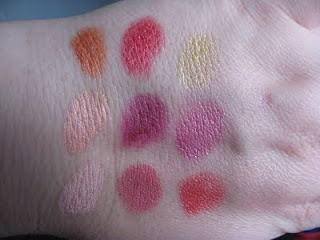 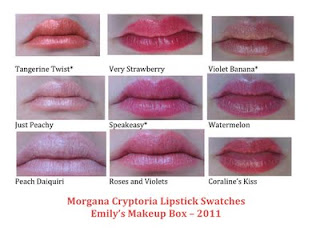 The first time I ordered, I got a full size of Azalea Blue and samples of Coraline's Kiss and Watermelon. Turned out that Azalea Blue just did not work for me - the texture was much drier than I expected, and it was too cool-toned for my skin. So I swapped it. I emailed Melissa, the owner, about the texture because I thought something was wrong with it. She told me that different colors have different textures due to the colorants varying from shade to shade, and offered me a store credit to keep my happy. Since I fell in love with the other samples, on my second try, I ordered those in full size. Love. Neither color is available anymore - but there's a similar color to Coraline's Kiss in the new lip balm formula, which I haven't tried. It's called Coraline's Doppelganger.

My third order was for Peach Daiquiri, Very Strawberry, and Roses and Violets. I have a bit of a struggle making Peach Daiquiri work for me as it's really, really pale, and my lips are fairly pigmented on their own. It's good for lightening other colors or using over a dark lip crayon. But, the other two are great. Anyone could wear Roses and Violets in even a very conservative office. Along with that order, I also got samples of Tangerine Twist, Gilded Lime, and Fire in the Sky. I instantly wished I'd gotten a full size of the TT, and had a bit of fun trying out green and blue around the apartment - then working them into frankens I'd wear outside the house.

Then, I won Just Peachy from Jill, at The Peach. Just Peachy is darker enough from Peach Daiquiri that I can wear it for a "nude" look.

A few weeks ago, I ordered the last three members of my Morgana collection: Violet Banana, Tangerine Twist, and Speakeasy (from the 1920s collection). Speakeasy was cooler and darker than I expected, but it ended up working really well. I'll be using a sheer wash of this as a stain. I'm thrilled to own Tangerine Twist, and even more thrilled to have gotten it on sale.

Violet Banana; however, is my surprise favorite. I knew ordering yellow was a big risk, but it seemed to come off more gold in other bloggers' swatches. So, I took the plunge, and I'm glad I did. On me, it's a multi-dimensional golden nude effect. Since my lips are so pink to begin with, the pink and the yellow make an orangey gold. It's also sheer enough that it can be worn really subtly. Nude lipsticks usually look somewhere between odd and awful on me, but this could cancel out some of my natural lipcolor without erasing them entirely. I have small lips, and a big face. I don't like it when my lips disappear.

Since anything with beeswax in it will cause blisters within minutes, it's really nice to have an option of fun colors of excellent quality that are vegan and safe. They really are worth the wait. I'm still waiting for an opportunity to order Plumeria, Dianthus, Gilded Cerise, Very Cherry (which has returned! Dang no buy!), and all of the sheer lip balms (they would be great for work!). I'm also sitting on my hands waiting for the gel lipsticks, which seem really interesting. Melissa has also just put out a bunch of lipglosses, and I think I want to try one - only thing putting me off it is that I detest wand style lip stuff.

She's back open tonight or tomorrow, so check her out.
Posted by Emily at 2:18 PM

About Me - Why Makeup?

Places I shop (and recommend)

Used it! And would buy it again.